Adam Martinson (MEDes) collected field information at Dinosaur Provincial Park for his masters degree in environmental science with the Faculty of Environmental Design at the University of Calgary.

As a graduate student, I spent two years studying road mortality of prairie rattlesnakes and bullsnakes in Alberta. My research was based in the park and focussed on identifying the scale of snake mortality on roads in south-eastern Alberta. The main goal of the project was to develop strategies to minimize the number of snakes killed on roads.

Recent studies estimate that one million vertebrates are killed on roads every day in the United States, and five million reptiles and amphibians are killed on roads each year in Australia. Unfortunately the situation is no different in Alberta, where dead prairie rattlesnakes and bullsnakes are commonly found on prairie roads.

Although we don't fully understand the impacts of road mortality on provincial snake populations, there is every reason to believe that the effects are significant.

Part of my research was investigating snake behaviour when they encounter roads, and using this information to predict the probability of them being killed when crossing. The results were shocking: a prairie rattlesnake had an 18% chance of dying when crossing a road that averaged only 353 vehicles per day! That's a very high risk of death without considering other roads, natural predation, or other human caused risk (such as being injured by farming operations).

Another component of my research was capturing and tracking prairie rattlesnakes and bullsnakes and comparing their movement patterns to weather. Understanding how weather influences snake behaviour is important because we can use this information to predict when snakes are most likely to encounter roads. With this knowledge, we can then develop strategies such as temporary road closures, to ensure they safely get to the other side.

Unfortunately, road signs to raise driver awareness have proven to be quite ineffective in other areas. Sadly, when some people are more aware of snakes on the road, they are more likely to deliberately drive over them! Clearly, for any protection strategy to succeed, it is important that people be informed on the topic, which hopefully will increase their concern for snakes and other wildlife, and their support of conservation measures.

Through this type of long-term study important factors such as population levels, reproduction success and mortality rates can help determine trends for both species in the province.


More Information
You can find more information on the status prairie rattlesnake and conservation efforts in Alberta at these sites: 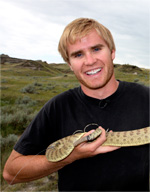