Our 2011 field work focused on prospecting in the Natural Preserve and in the west end of the park.  A group of ceratopsian elements found in the Preserve was initially thought to be part of a skull. However, when two nasal horns were located, it was recognized as a small bonebed, perhaps the smallest ceratopsian bonebed we have documented.  As the material was prepared over the winter, it proved to be interesting in a number of unexpected ways.  One of the elements is a nasal bone of a juvenile ceratopsian that has not yet fused.  This is our best example of a nasal at this stage of development.  The second nasal is from a fully mature individual and is unusual in having a number of holes in it.  We don't yet know what caused the development of these openings.  They don't appear to be puncture marks because some are too big and one seems to go right through the nasal horn.  Possibly they are an example of bone disease.

Another specimen found in the Preserve was a turtle of the genus Boremys.  This Late Cretaceous Period river-dweller looked somewhat like the Painted turtle but grew much larger in size.  Boremys probably had a typical aquatic carnivore diet of amphibians, snails, fish and insects. However, unlike most modern turtles, Boremys could not pull its head back under the protective cover of its shell. We collected a nearly complete shell and a femur, the upper hind leg bone.  The shell was sitting on its side, which is often the case with that kind of turtle.

We surveyed locations in the park's west end that had not been visited for many years.  The main result of our efforts was the discovery of horns of the ceratopsian Centrosaurus apertus. This is of particular interest because it will help us document the timing of the transition from Centrosaurus apertus found in older layers to another horned dinosaur, Styracosaurus, which is found in younger rock.

One of the goals for our 2012 field season will be to try to pinpoint the stratigraphic interval at which the newly described ceratopsian species Spinopssternbergorum occurs.  This taxon is based on material collected in Dinosaur Provincial Park in 1916 by Charles H. Sternberg and his son Levi for the British Museum of Natural History in London.  The original locality is not known but we suspect that it occurs at an interval intermediate between Centrosaurus apertus and Styracosaurus so we will be focusing on that stratigraphic interval.

This coming year, we will also continue working on micro-vertebrate sites to better understand the small animals that lived here on a coastal plain next to the Bearpaw Sea 75 million years ago.

And as always, we will expect the unexpected. 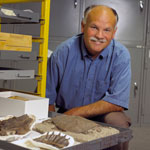